This past year a group of 20 people affiliated with Concord Institute completed a 12-day pilgrimage to Japan, highlighted by a trek through the Kumano mountains of Wakayama prefecture over several days, paying our respects to three ancient Shinto shrines. The main shrine, the Kumano Hongu Taisha, was celebrating its 2,050th birthyear since its founding.

It so happens also that Kokawa town nearby in Wakayama prefecture was the birthplace of my teacher, Michio Kushi, who was born there on 17 May 1926. Mr. Kushi almost single-handedly was responsible for the emergence of the worldwide macrobiotic and wholefood movement that has become so popular in recent years.

Mr. Kushi passed away in 2014 at the auspicious age of 88, while living in semi-retirement in the city of Boston in the US. Japan has several age markers for longevity. The age marker for 88 is called “beiju”(米寿) consisting of characters for rice (米) and longevity(寿). In a way those two elements capture the essence of macrobiotics, the body of work to which he committed his life.

Michio was a towering figure in the field of oriental medicine and philosophy and was credited personally by the Smithsonian Institute’s National Museum of American History with founding the natural food and wholefood movement in the United States.

In Japan, as a young man, Michio developed a keen interest in world peace due to his experiences as a young soldier in World War II, having witnessed the aftermath of the atomic bombings of Hiroshima and Nagasaki. After the war, he graduated from prestigious Tokyo University where he studied law and political science, followed with graduate studies in international law.

One day while out in Tokyo, amidst the rubble as Japan was rebuilding from the war, he stumbled on an odd building with an oversized sign which read Student World Government Association. Amused, he went inside to inquire since he shared a similar interest. It was there he met Yukikazu Sakurazawa (later adopting the name Georges Ohsawa), a former pacifist and writer, who had organised this centre to promote “shokuyo” or macrobiotics as it is now called, a method for establishing health and peace by returning to a more traditional diet of whole, natural foods.

It was his belief that true peace could not be achieved without a concomitant biological change instituted by changing the food we eat. Upon entering the building, Michio noticed that the shoes removed at the entrance by those inside were haphazardly strewn about. He took the time to rearrange the shoes in pairs with the shoes pointing away so that they could be easily stepped into upon departure. When Ohsawa was informed of what Michio had done, he acknowledged Michio publicly, realising that he had a special student indeed.

Michio studied macrobiotic philosophy under Ohsawa for a period of time but in 1949 decided to go to America to continue graduate studies at Columbia University in New York. As his practice of macrobiotics continued, he noticed a distinct change in his health and well-being. It was not long before Michio began broadening his study of diet and nutrition and began teaching macrobiotics. In the early 1960s, Michio and his family moved to Boston.

As an academic, I am sure he felt at home in Boston, home of some of the most important institutes of higher learning in the world. It didn’t go to well at first. In 1966, his attempt to establish an institute to promote macrobiotics in his home residence failed to get approval from the local planning authorities of both the towns of Cambridge and Wellesley. He eventually settled in Brookline, a town just outside Boston.

By that time, he had already started gathering a small following of students, among them one Evan Root, a close friend and facilitator for the Institute. Michio and his wife Aveline also began importing traditional food products from Japan such as miso, tamari, and umeboshi. Before long, a small retail outlet called Erewhon Trading Company was opened on Newbury Street in Boston.

Some consider this the first authentic natural foods store in America. I had the privilege to work there in the early 1970s as produce manager and later as store manager. It was an extremely popular market. It was so crowded on weekends that you could hardly move about in the store. Years later, I was commissioned to open a new Erewhon store in Brookline by Aveline Kushi. She had given me $25,000 and provided a dozen or so work-study students from Europe who exchanged work at the store for room and board at the Kushi house.

By the way, though his students including me often called him Michio, it would have been unthinkable in Japan to address him in that way. In Japan, Michio would simply be called “sensei”, a term of respect whose literal meaning was someone born earlier than you, but in fact carried an important distinction and air of authority such as doctor, professor, lawyer, or teacher.

In the late 1960s and early 70s, something remarkable began to happen. There began an amazing convergence between the efforts of Michio to promote macrobiotics, and the youth of the time who were growing more disillusioned with the Vietnam war and the direction of society in general. People, including myself, got wind of macrobiotics through the underground grapevine and flocked to Boston to work and study in the growing macrobiotic community.

The macrobiotic community at that time consisted of several retail stores, a natural food distribution company, several café-restaurants, a bookstore, and numerous study houses where upwards a dozen or so people could share a house or large flat. Typically, a study house was operated by a senior macrobiotic husband-wife team who provided home-cooked macrobiotic meals and some informal macrobiotic lectures or classes.

Michio was also giving public lectures on weekday evenings at the Arlington Street Church, which later became the venue for the memorial service to honour his life. The lectures I attended were far-ranging and inspiring. He had a slow deliberate way of speaking, presenting his lectures so that what emerged was a grand and unique interpretation on diverse subjects such as biological evolution, nutrition, organ relationships in the human body, world history, male-female relationships, types of diseases, various occult sciences such as the I Ching, 9-star astrology, and Feng Shui to name a few.

He and his family ultimately relocated to Buckminster Road in Brookline, a large 11,000 square foot stone mansion that was originally part of a local college campus. It was around this time, the mid-to-late 70s, that macrobiotics began to shift its emphasis away from larger cosmological questions discussed at the earlier lectures, toward healing serious illnesses such as cancer, diabetes, AIDS, etc.

In the early 80s, macrobiotics suddenly achieved new popularity on account of a book called Recalled by Life, written by Anthony Sattilaro, a medical doctor and president of a hospital in Philadelphia, that documented his recovery from pancreatic cancer through macrobiotics. Soon after, Michio, as well as many senior macrobiotic teachers, began spending more time consulting with cancer patients and others with serious illness who flocked to macrobiotics after reading this book.

Having lived in Japan for nearly 10 years, I understood the enormity of the commitment that Michio made in coming to America to share with us the dietary and healing practices of the Far East as a means toward achieving world peace. Had he stayed in Japan, he most likely would have had a natural escalator to the highest echelons of business or government, given his educational credentials.

It is that commitment to leave his homeland and dedicate himself toward one peaceful world for which I honour the life of Michio Kushi. Without that commitment, I perhaps would have had quite a different life. I am grateful beyond words to Michio for the gifts I have received that have enabled me to care for my health for many decades, to raise a healthy family, and to find something meaningful to which to commit my life. Michio may very well have been, as he claimed from time to time, an earthly manifestation of one of the Shinto deities that form a spiritual nexus throughout Japan by way of the many Shinto shrines. 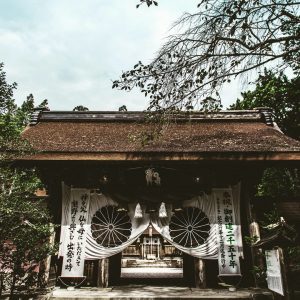 The gateway to Kumano Hongu Taisha, the Shrine itself we were asked not to photograph.